1. Eschatology refers to the study of the last things, or of the age yet to come, the Kingdom of God. This is in contrast to what humanity had previously known as the current age, the time before Jesus had been sent. However, after He came, the new age was upon humanity. Paul’s epistles help make this much clearer. He says that with the coming of Jesus, the new age has now overlapped with the current one. Since the Kingdom of God is upon us, it is humanity’s utmost responsibility to prepare themselves for the coming apocalypse. In the meantime, the Son and Spirit are now readily available to us where they weren’t before the ages began to overlap. Before the New Covenant was established, humanity could not say that they were in spiritual unity with the Savior. We now view concepts such as redemption and freedom as something we participate in now, as well as something to look forward to.

2. Question #1 – The Kingdom is a present experience because we now have bountiful grace, due to Jesus taking our place for our sins. In this way, we do not have to worry about not measuring up to God’s standard, since we cannot in our fallen world. But the Kingdom is also a future hope because we can never be truly free of sin in our worldly context. Once the new age has fully come, we will know peace and purity from all evils and sin. In the present, we already have a relationship with God, although He isn’t seen. We are free to reach out and feel Him, whether it’s the Father, Son or Holy Spirit. What we still hope for is a chance to come face to face with Him, and also enjoy the rich, eternal pleasures of being one with Him forever. Until then, we have faith that that will come. 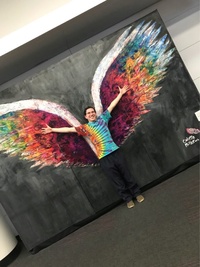