1. The theory of atonement that I haven't used before would be the ransom theory. This theory states that the death of Christ was in essence a ransom paid to Satan or death and this ransom is paid in order to satisfy our inherited sin by removing our bondage to sin. This view on atonement in my eyes is useful but also has some issues I believe. It gives the devil much more power than I believe he has. Also I don't recall the bible ever saying that we owe Satan anything. The bible speaks on paying a ransom but that ransom is paid to God the Father. Our sin put us in debt to God therefore our ransom paid would have to be paid to God the Father. But there is still parts of this theory that I could share with a nonbeliever that I think would work over well. The main one being the idea of inherited sin or original sin. This fact that when we are born we are born with sin in our hearts that separates us from God. We are a slave to sin and when Jesus comes to pay it all he is freeing us from our bondage. This then shows the power over the Devil that Jesus has. We are stuck in our sin and when Jesus came and died for us he defeated Satan and gave us a way to no longer be separated from God. 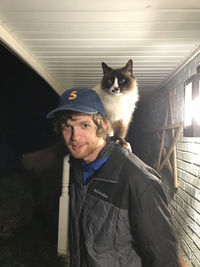